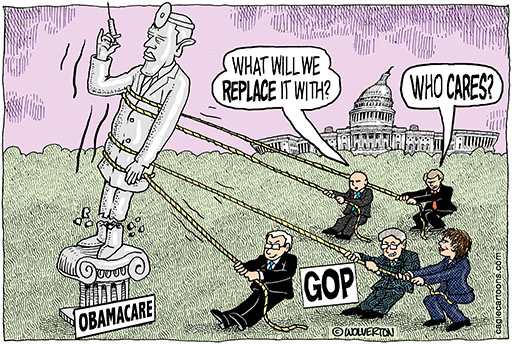 We know that the Patient Protection and Affordable Care Act (aka Obamacare) cannot stand without change.  What we don’t know is what will replace or repair it.  Given the array of statements regarding values and principles, there is the potential for public policy that could largely deliver on a set of shared values (based on what has been posited by analysts at the Urban Institute’s (relatively liberal leaning) and the American Enterprise Institute’s (relatively conservative leaning) proposals.

What are these shared values?   Based on Speaker Ryan’s famous PowerPoint presentation (March 9, 2017), President Trump’s remarks on a number of occasions, and those of the aforementioned or organizations, I suggest the following:

Clearly, these desired objectives for public policy require more specifics to be informative.  Furthermore, many participants in the policy debate don’t accept all of these values but many do; so agreement in principle seems possible. 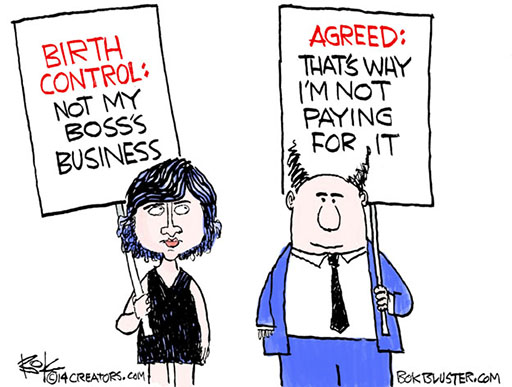 Of course, agreement in principle won’t take us very far when interests and ideologies play a significant role in political decision-making.  In 2010, Democrats passed the ACA without Republican votes, and Republicans hope(d?) to reverse the favor in 2017.  Such competing interests ensure that the aforementioned set of principles will not be delivered upon.  One can characterize this split into two polarized, non-overlapping camps: one seeks delivery of a defined benefit based on public provision or organization (often the position associated with Democrats ) while the other seeks a defined contribution that limits the  role of government and invokes market forces as the primary vehicle for policy (a typical Republican position.) 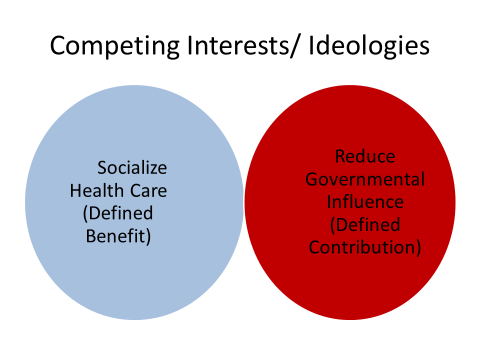 Those who believe in a collectively set defined benefit that is largely government organized and funded base their views on beliefs such as the following:

Some pose a single payer (Medicare for all) as the ideal approach (as in Canada) or even a national health service such as exists in the United Kingdom or Sweden.

Critics of this top-down governmental approach argue that:

In contrast, those who believe in a market driven system desire a structure that emphasizes individual responsibility with governmental involvement limited to a fixed amount of financial assistance (defined contribution) to discourage consumption. They hold views such as:

Critics of the market competition approach argue that:

In a November 2016 publication, the Congressional Budget Office (CBO) indicated that the exemption of employer sponsored health insurance from federal income taxes reduces revenue collection by over $260 billion per year.  They estimate that over the next 10 years, such foregone revenue will accumulate to over $3.6 trillion, well in excess of their calculations of the budgetary effects of the ACA.  Furthermore, based on the work of Kaestner and Lubotsky (Journal of Economic Perspectives, Spring 2016), I calculate that 56% of these benefits accrue to those in the highest 30 percentiles on the family income scale and that those in the lowest 30 percentiles receive only 6% of such benefits.   Most economists view this tax preference as both inefficient and inequitable.  This rich resource could be used to improve both the equity and the efficiency of the current health care system; however, those (interest) groups who would lose under such policy reform have lobbied long and hard to keep this treasure trove out of the policy debate zone.

As noted previously, I agree with Gail Wilensky’s conclusion as posited in a recent Milbank Quarterly Op-Ed piece.  “The forces for ‘repeal and figure out next steps later’ may be too great for serious, bipartisan legislation – even if it complicates the ultimate goal of ‘repeal and replace.”  Put differently, sustainable, cost-effective, and equitable reforms won’t take place if partisan interests (whether Democratic or Republican) dictate reforms.

In addition, I believe that serious responses to the above questions should consider the savings, improved efficiency, and reduced inequities that can come from capping (reducing or eliminating) the aforementioned, huge commitment to income tax exclusion for employer sponsored insurance. Furthermore, the role of competition in clinical care delivery markets has been woefully neglected by all partisans. As noted in recent pieces by Martin Gaynor in both Health Affairs (blog March 2016) and JAMA (March 2, 2017), decreased competition in hospital and physician markets has affected, and will continue to, greatly  the prices of medical services provided (see figure below) and thus insurance premiums and growth rates.  For example, he and his JAMA co-authors note that “since 2010, there have been 561 hospital mergers, and nearly half of hospital markets are highly concentrated.”

Based on what I’ve argued above, I’m not optimistic about improvements in health care public policy at either national or state levels. I’m not total pessimistic, however;  there exists potential at local levels to craft multi-stakeholder initiatives that better allocate resources we presently devote to clinical care to those determinants of health that have the greatest effect on both spending and health. For those interested, check out the initiatives described at ReThink Health (www.rethinkhealth.org.)

3 thoughts on “The Affordable Care Act: What’s Next?”